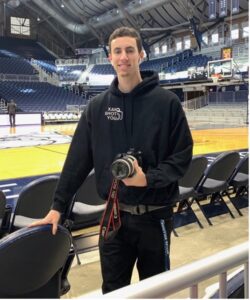 Xan Korman found his passion in photography, the language he used to tell his stories. Xan’s main focus was sports photography, especially basketball, but he also explored the worlds of street photography and social justice. Xan didn’t take just great photos of the action, but what separated him from others was “shooting away from the ball.” He was compelled to chronicle social events like the Black Lives Matter marches to record this powerful response to injustice. Behind the lens, regardless of what he was photographing, he focused on the moment’s emotion and captured the beauty that exists in human excellence.

Xan rose through the ranks at Butler University, starting as a photographer for the student paper, moving to photo editor, and then securing a spot with the basketball team as photo and video manager. He had a photo published in the Washington Post while in high school. Although he was young, Xan had taken to mentoring other rising photographers. His fellow creatives described him as generous, talented, and selfless.

Xan was always thinking of others. One of his last assignments was the Nike-sponsored Peach Jam basketball tournament for elite high school players. NBA greats LeBron James and Carmelo Anthony were sitting on a bench together and another, more junior photographer, told Xan to take the photo. Xan said no because he wanted to photograph his friend taking this once-in-a-lifetime picture. The photograph that the other young man made was published in People magazine, ESPN, and other outlets and changed his career trajectory. We are proud that Xan was happy to give opportunities like these to others. We are hoping to continue that legacy here.

In August 2021, Xan was shot and killed in a drive-by shooting at 20. He did not have a chance to live out his dreams, so we are hoping to help others do so.