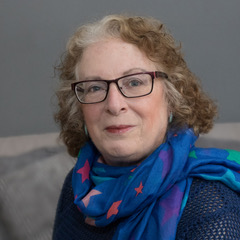 Liane Enkelis established this scholarship in honor of the people who made her career in photojournalism possible: Her parents, Bettijune Kruse (a gifted fiction writer) and Benedict Kruse (a journalist and photographer): who kindled and encouraged her love of photography Harvey Weber, Director of Photography at Newsday, Long Island, NY, and Recipient of the NPPA Joseph Costa and Joseph A. Sprague Awards: whose mentorship set her firmly on the path of photojournalism Richard L. Enkelis, her late husband of more than 39 years: whose constant support and belief in her made her career possible.

Liane Enkelis credits her career in photojournalism to NPPA-sponsored newspaper internships. After working on her school newspapers, she won an internship with the Gannett Newspapers in Rochester, NY (The Times Union and The Democrat & Chronicle). The following summer, she was fortunate to intern with Newsday, Long Island, NY, and to be mentored by the great Harvey Weber. Weber led daily critiques of all staff work, and Liane flourished with this guidance.

Liane worked as a staff photographer for the Anchorage Daily News, Anchorage, AL (winning many NPPA Clip Contests) while her husband served in the US Army from 1969-1971. After returning to the “lower 48,” the couple settled in the San Francisco Bay area. Here Liane’s desire to continue her newspaper career was halted by the provincial attitudes toward women photojournalists. Although she applied for numerous available newspaper staff positions, she was repeatedly told, “We don’t hire girl photographers.”

During her career, she photographed many of Silicon Valley’s legends, yet she was often slighted because of her gender. Once when working on a story she’d proposed for National Geographic’s children’s magazine, WORLD, she waited patiently for the airplane she’d hired. Finally, getting nervous that the light would fade, she inquired when the plane would be ready. “We’re waiting for your photographer to get here, lady,” she was told. “Well, you’re looking at her,” Liane replied, “and she doesn’t want to miss the light, so let’s get going.”

Liane’s interest in telling stories through photography led to her proposal and publication of two books, focusing on often ignored segments of the population. On Being 100: 31 Centenarians Share Their Extraordinary Lives and Wisdom (Prima Publishing) features portraits and interviews with people born in 1900 or earlier who witnessed a century of change and accomplished remarkable things (an L.A. Times Bestseller). On Our Own Terms: Portraits of Women Business Leaders (Berrett-Koehler) features portraits at home and work and in-depth interviews of 15 women heading firms of more than $10 million gross annual revenue.

Her career as a photojournalist allowed Liane to travel extensively – including doing coverage of the Philippine revolution in 1986, resulting in her work being selected for inclusion in an international documentary book (Bayan Ko) of the events. Liane’s interest in giving back to the field of photojournalism led her to teach at various colleges in California, including San Jose State University and Glendale Community College (where she helped to reestablish the dormant photojournalism program). In describing her love of photography, Liane states: The camera has always been my doorway to the world. When I picked up the camera in secondary school, my feeling that I was an outsider — a somewhat shy girl with thick glasses — didn’t seem so painful. The camera became a way to distinguish me and to go beyond the social boundaries, to go where I would not otherwise be granted access.

Photography became my way to explore the world. Through this lens, I could learn about the world and consequentially, about myself. I was driven to share what I saw, to try to explain what I experienced, and to try to understand purpose and meaning.