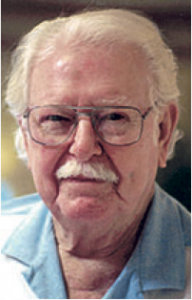 G Gordon Yoder joined the NPPA in 1946, when it was first established. He went on to win their Photographer of the Year and in 1994 the Sprague Award. In 2000 he and his wife, Irene established the G Gordon Yoder TV NewsVideo Workshop Scholarship with a large donation to the National Press Photographers Foundation. The $1,000 grant is awarded annually by NPPF to a working television news photographer who wants to attend the workshop in Norman, OK.

Gordon Yoder received his first still camera at the age of 8 years and won his first “first prize” in a photo contest held at a summer camp that year. A year later his grandfather gave him his first movie camera, an Agfa-Ansco 16mm.

In the fall of 1937 Yoder got a job at Jamieson Film Co. in Dallas, TX. He had no professional experience and worked for free until Mr. Jamieson thought he was good enough to pay a salary. That took two weeks. Yoder began shooting newsreel stories for Paramount News in 1943. When the Korean War broke out, Paramount sent him to Korea as a cameraman for the American Newsreel Pool. In 1952 he went to work for Telenews and worked for them for 16 years, until they folded all news operations. 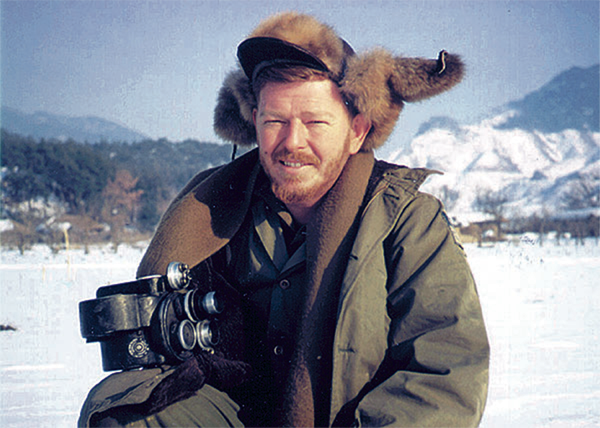 It was during this period that he set up a machine shop in his garage and began converting Cine Voice sound film cameras that at that time held only 100 ft of film –producing only about 2 minutes and 45 seconds of continuous pictures– into a camera that would take 400 ft -1200 ft magazines, extending the filming time greatly.

Yoder founded Professional Cine Products in 1968 and later changed the name to Gordon Yoder, Inc. He made many improvements to the Cine Voice conversion and designed and built motion picture equipment (sometimes called the Yoder Cam). By l977,  video tape began to appear in the newsrooms instead of film, and Yoder received an offer of a buyout in early 1978. He jumped at the chance and retired.

During his career Yoder photographed U.S. presidents from Harry S. Truman to Richard Nixon, presidential inaugurations, the integration battles of the south, the landings of astronauts Alan Shepard and John Glenn, and major disasters and news stories across the country.

Today’s younger television photojournalists may not know how important the advances Yoder made to the television news industry are, freelance television photojournalist Bob Brandon believes. “There were precious few significant advances in the way newsfilm was used, and Gordon made at least three of them,” Brandon said. “His converted camera meant that we could shoot longer than 2 minutes and 45 seconds. Before magnetic sound on film was invented, cameras simply weren’t portable. Sound was recorded optically and it required a huge, heavy conversion box. The sound camera gained prominence, finally, with the invention of the direct current (DC) motor that could run the camera with a strictly controlled speed. Until then we had to carry not only a heavy battery pack (lead-acid, because Ni-Cads were not invented yet), but also an inverter to convert the electricity to alternating current (AC). The Yoder conversion cameras, and the CP-16s that followed, revolutionized the way we could cover news. We’re all grateful to Gordon for his contributions.”

“Gordon Yoder was a pioneer. He was one of the first people to design a camera for what we really did,” renowned television photojournalist Darrell Barton said. “I met Gordon in 1969 at a seminar in Houston. He was a big, vibrant man. We were using his Auricon conversion cameras at WKY in Oklahoma City. I remember visiting his operation in Dallas. It was a good-sized place and he was the owner and CEO but you didn’t find him in the office. He was in the back in the shop, tinkering and making things work.

“We didn’t always get along. I bought one of his first made-from-scratch cameras in 1973. It was a beautiful design but the one I got was just a half step from being a prototype. I had problems with it, and I was young and obnoxious. I complained, and he fixed. I complained, and it never really got fixed. Our relationship was strained until the early ‘90s when I went to pick up an award at the NPPA convention in Santa Fe. Gordon was there to pick up his Sprague Award. They seated us at the same table, and I was worried about it. I shouldn’t have been. It was a great evening, he was a great gentleman, and his wife was a delight. He and I talked. A lot. It was an honor to sit with him.

“When Gordon talked about this life you could see a flame in his eyes,” Barton said. “He lived every minute of it. I had the privilege to know him and I’m better for that.”

As Yoder said upon retirement, “I’ve never worked a day in my life – it’s all been fun.” 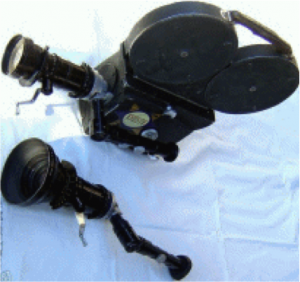 This is an original Gordon Yoder, model 31507.Yoder, who died in October, 2005, was the owner and operator of Gordon Yoder Inc. in Dallas, Texas. He developed a modification for the 16mm Bach-Auricon sound-on-film camera, expanding its film capacity to hold larger film magazines, incorporating a transistorized magnetic sound recording system, and using 12 volt synch motors. Many considered the Yoder camera a standard of the news film industry.