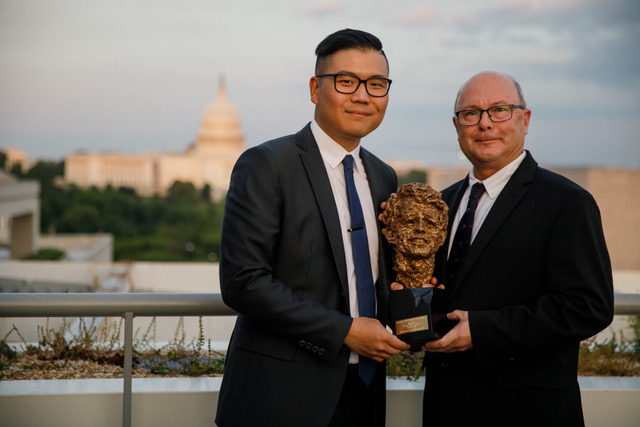 Alan Hagman’s strong visual acumen and robust journalist chops strengthened the daily reporting of the Los Angeles Times for more than 30 years until his untimely death at 55 in 2019.

Alan grew up in Pittsburg, Kansas, and began pursuing photography in junior high by working on the school newspaper. His passion for photojournalism grew at the University of Kansas William Allen White School of Journalism. He was engrossed in covering KU sports and campus activities, including a Hunter S. Thompson campus appearance. Thompson’s Gonzo journalism remained a lifelong interest for Alan.

In 1986, he was awarded an internship at the White House, as the press photographer for then vice president George W. Bush.

Hagman was offered a job as a staff photographer for the Los Angeles Times after editors noted his work ethic and drive during his internship from 87-89.  With an eye for capturing the right moment, his pictures regularly made page one — whether covering local news or the more extensive projects. Early in his career, he won the 1998 Life Magazine and AP photo of the year award with a memorable photo that captured the futility of standing up to Mother Nature, as woman tried helplessly to close a sliding glass door as white wash from the pounding surf churns into her living room of her beachfront home.

He moved to the Times Los Angeles bureau in 2001 and became a photo editor in 2004, advancing to deputy director of photography. His colleague Ben Welsh noted that Alan was also a key player in the effort to produce ambitious digital journalism at the Times.

Alan planned and managed numerous daily assignments and projects including coverage of the Rose Bowl, the Oscars and the Olympics.  He covered the 2006 Olympics in Torino and oversaw many international assignments, supporting Times photographers during difficult overseas assignments like the Gaza Strip, Afghanistan and Iraq.  Photo staffers knew Alan had many friends from around the world. Everyone knew when they called for help, he was the “fixer” for those covering assignments in the field.

“He was always — and I mean always, always, always — the nicest person in the room,” said Rick Loomis, a former Los Angeles Times photographer and a very close friend.

The Los Angeles Times obituary noted, Alan Hagman was “admired as a photographer and respected deeply as a photo editor, the quality that seemed to follow in his wake was one of kindness and civility.”

In May of 2019, Alan and Times photographer Marcus Yam received The Robert F. Kennedy Humanitarian Award for International Photography for the project, “The Great March of the Return,” documenting Gaza/Israel border clashes. Alan told Yam the award was the most meaningful recognition of his career. Other honors included an Emmy in 2010 as executive producer for the multimedia project “Caught in the Crossfire, Victims of Gang Violence,” Pulitzer Prize team photo recognitions, a Webby and numerous POY awards.

Alan Hagman was committed to the highest standards of photojournalism and the impact of photography to convey the importance of events around the world. He supported freedom of the press and helped protect journalists reporting stories from countries where news was suppressed.

Alan’s family announced the Alan Hagman Photojournalism Grant in his memory. A $5,000 grant, to be awarded annually, will be administered by the National Press Photographers Foundation (www.nppf.org). The grant is supported by donations from the Hagman family and Alan’s friends and colleagues.

“Alan was so talented, yet very humble,” his sister, Dr. Jennifer Hagman remarked. “He was a passionate advocate of the free press, The Los Angeles Times and the critical role of photographers in bringing national and global perspectives to Times readers.  The Alan Hagman Grant will support photographers in carrying forward Alan’s dedication to the importance of photography and visual story telling to raise awareness of issues and stories that might otherwise not be told.”